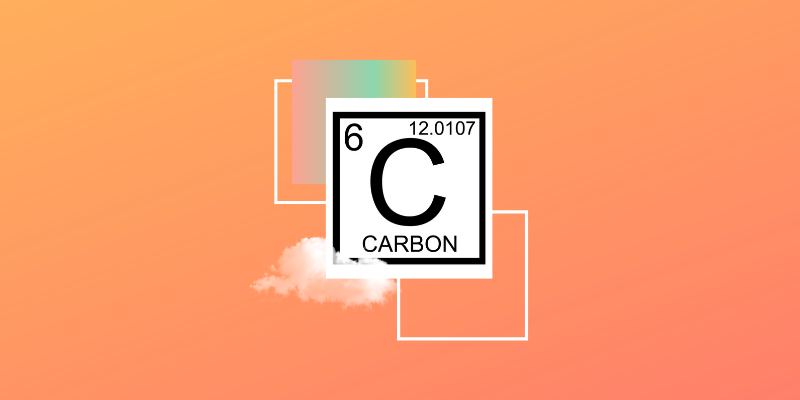 If you’re even casually glancing at news about the environment, you hear people talking about carbon a ton. It comes up in conversations about the atmosphere, about trees, cars, plastics, the soil, buying carbon offsets, and in calculating carbon footprints. If you need an ELI5, don’t worry, you aren’t the only person wondering how carbon can be part of all these conversations. This handy primer on carbon will have you feeling up to speed in no time:

Where some elements really want to do their own thing, carbon is quite happy to pair with other elements, and so you see it in a number of different “relationships” as it were. There is a bunch of carbon on Earth and every living creature on our planet is largely made of variations of carbon. This means everything from little plankton and algae to dinosaurs, plants, and yes, even genre-bending animals like the platypus. Humans? We’re about 18% carbon.

If you think about carbon like a childhood interlocking toy block (which may or may not rhyme with “preggo”) you can quickly see how, depending on the way the combined blocks are shaped, they can perform a lot of different functions. This is sort of like how carbon can be both a key player in our human bodies, pencil lead, diamonds, and greenhouse gas. It’s all carbon, but in different forms. If something were to come along and break up these forms, that freed-up carbon could then pair up with something different, become something else, and yet still be “carbon” at the end of the day.

If you grow a tree, it will take carbon from the air and soil around it and hold onto that carbon for the time it’s alive, sort of preventing the carbon from moving on to other forms. About half the weight of a tree is just carbon alone. In this way, life forms can be thought of as “holding onto” or “storing” carbon. Even microscopic life forms in our soil hold carbon. You can imagine then, how something like a forest teeming with life is actually storing massive amounts of carbon.

What about carbon in the air? Carbon becomes gaseous through the respiration of plants and animals. When you exhale, you breathe out carbon. It also becomes gaseous when sources rich in carbon are burned, as is the case with coal and fossil fuels. Carbon dioxide in the air has a warming effect, which in-balance is very helpful. It helps hold onto the heat the sun sends to Earth – sort of like how if you put on a jacket you’d stay warmer longer. The carbon dioxide in our atmosphere has been rather like a jacket which matched the temperature we hoped to keep.

Fast forward to the Industrial Age and humans are burning so much fossil fuel that we’re scattering extra carbon dioxide all over the atmosphere. It’s like adding coats on top of jackets on top of scarves. At a certain point, you overheat. And we are doing this at the same time that we are doing things like clearing forests so we can have paper, or graze cows there instead because beef is so in demand. Most of these forests are burned in the process. Their carbon? In the air now. The carbon they would have held onto as they continued to grow? Still on the loose. And the jacket situation? Getting worse, not better.

This jacket/overheating issue is the Greenhouse Effect. And the problem is it’s starting to mess up other things big time. Glaciers have melted. The normal rhythms of rain and storms, drought and flood are alllllll starting to go drastically sideways. And while a few bad years here or there might not seem impossible to overcome, imagine a nation not being able to reliably predict where it should grow its crops for the next year or ten. Planting them and then losing them to record-breaking floods, for which you could not possibly have been prepared. Imagine not knowing if the land you own is going to be lush, or dried kindling prone to devastating wildfire. Or if your oceanside home is going to be swept into the waves by the next climate change-enhanced version of a hurricane on steroids. To say nothing of the animals and plants who have no voice, but whom we’ve devastated. Last year the UN warned we have put one million species at the verge of extinction. You don’t have to be a biologist to know, losing that much diversity in our systems is going to have massive, dangerous repercussions for all remaining life, including humans. (A must-read piece on why biodiversity keeps humans healthy is tellingly titled “How Humanity Unleashed a Flood of New Diseases.”)

With that in mind, remember the water cycle: the way water moves from the rivers to the oceans, to the clouds and then comes back down as rain to do it all over again? Carbon does something similar. It’s called the Carbon Cycle and this handy little image shows the gist of it. 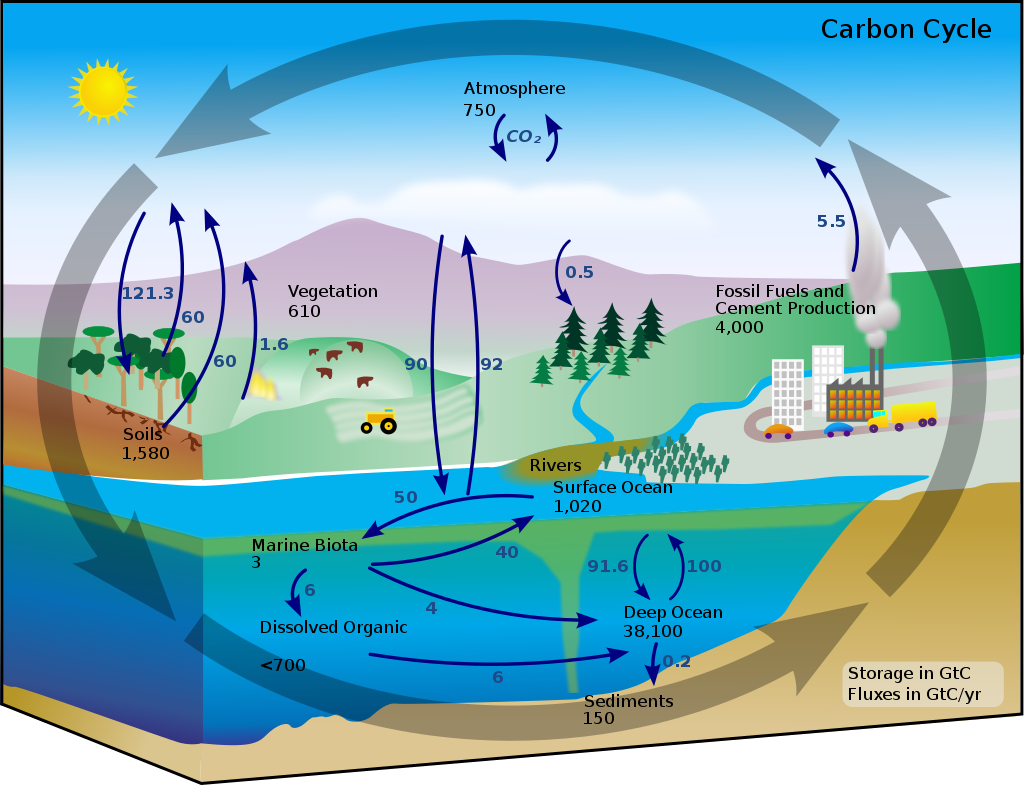 In its gaseous form, carbon dissolves into our oceans and is within reach of small life like plankton. The plankton are then eaten by bigger and bigger creatures, and on up the food chain the carbon goes. This is a perfectly normal situation but! having excessive amounts of carbon dissolved into the oceans changes the balance of the situation. Specifically, it makes the water acidic. You can quickly imagine how life in the ocean might have a hard time with suddenly being in a pH environment they are not designed for. I would be pretty unprepared to deal with drinking water becoming vinegar, for example, and that’s to say nothing of being coral or needing a shell only to live in water with pH levels which dissolve corals and shells. To give you an idea of the scale of what’s happening, the ocean is currently absorbing about 22 million metric tonnes of carbon each day.

Behind this whole convo about carbon is the fact is our entire planet, across almost all nations, is currently centered around burning fossil fuels. Even if you don’t have a car, don’t use plastics and grow your own food, the fact is mundane, everyday life still relies on fossil fuels. From powering our grids to transporting our goods. Really, we’re quite married to them.

When someone talks about their carbon footprint, what they mean is how much carbon your activities release to the environment. Driving a car will have a larger footprint than walking somewhere. Buying produce from a nearby farm is a smaller footprint than buying from someone states away whose goods need to be trucked. Jet fuel is more “rich” to burn – and by design, it’s powering incredibly hungry, thrust-generating engines and making flight possible – but of course this means jet fuel is of course going to leave a bigger carbon footprint. Calculating how big your carbon footprint is over even one afternoon can be very difficult because of the hidden carbon that informs our everyday life. Turn on the lights. That switch was made of plastic, a petroleum by-product, and the power you just sent to the light bulb? That likely came from a power plant burning fossil fuels to some degree to send power across its grid.

Talk of carbon footprints goes hand-in-hand with talk of carbon offsets. We wrote about them here but the TL;DR is that there are projects going on around the world which stop carbon from being released, or help pull released carbon into things like trees again. They try to get it out of circulation. Some of these projects are tricky because it’s an emerging concept and many people want to do good but aren’t sure how to discern quality carbon offsets from snake oil salesmen. There are also many wonderful projects which deserve support. By paying towards these projects, this work helps “offset,” or balance out to some extent, the carbon footprint in question.

What most people have done up until this point was largely not pay much attention to what science has had to say. This is in part because the companies who stood to profit the most from burning fossil fuels, and from burning forests, suppressed the data in a successful bid to keep us handing them our money. For example, ExxonMobil is alleged to have spent $30 million on think tanks spreading climate change denial after their own scientists in the 1970s independently predicted data and downstream side-effects which are more or less exactly what’s happened to the planet since. They knew.

I know this is not a super exciting happy thing to read, and you might be thinking “Really, you’re posting something this sobering in 2020? It’s already a terrible year.” Hear me out –

The story isn’t finished. We don’t have to accept terrible things because they are difficult to change. In fact, we have a duty not to. We must meet these challenges with open eyes and rigorous questioning – asking what’s actually happening? Who is profiting? Who is harmed? Who has no voice? Does a choice make immediate revenue while pushing costs or delayed harm onto someone or something else?

Something To Smile About: Inc. 5000 x MagicLinks

By Brian Nickerson, CEO and Co-Founder, MagicLinks Choosing an intention for the year ...

Your 2021 Strategy: The Necessity of Social Listening for Influencers

IDK who needs to see this, but please share on your platforms ❤️

Biodiversity, Climate Change, and Your Health